Your browser does not support JavaScript!

Our Professional and Caring Staff 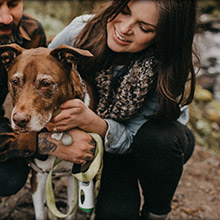 Chelsea began working in the veterinary field in 2007 as a technician assistant in Laguna Beach, CA. She went on to pursue a career in management outside of the veterinary field, but in 2014 made the life changing decision to return to her true passion of working with animals as a vet assistant. Her favorite part of veterinary medicine is working with the special needs of senior dogs and cats. When she is not working at AVC, she volunteers as an associate board member for a local all-breed dog rescue. She and her partner share their home with 1 perfect senior pup, 1 lovably imperfect rescue pibble, and 1 very bossy cat. 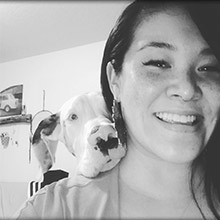 Elizabeth got her start with veterinary medicine in 2000 at a small clinic in the Bay Area. She relocated to Portland in 2005 to continue her veterinary medical career as a technician and, in 2009, switched paths to include aviation. She is currently completing her helicopter ratings and has since returned to the veterinary field to fulfill her love of helping animals. In the future, she hopes to combine her love of animals with her passion for flying, doing research or conservation work overseas. Elizabeth is mom to a Great Dane puppy named Groot, a little terrier named Spock and an incredible curmudgeon of a tortoise named Elliot. 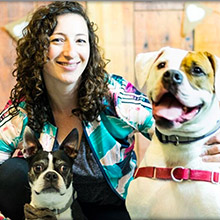 Ariel entered the veterinary field in 2013 after graduating from the Bel-Rea Institute of Animal Technology in Denver, CO. Ariel is a Denver native and, after working at a clinic there for over 2 years, she made the move Portland with her husband and 2 dogs. Ariel worked at a clinic in West Linn for nearly a year before joining the team at Alberta Veterinary Care. An animal lover all her life, Ariel is glad to have found a career working with animals and especially loves dentistry.

Fun fact: Ariel played competitive women’s flat track roller derby for 10 years. She played with the Denver team for the majority of her career and was a member of the World Champion Rose City Rollers in 2016 for her final season. In her free time, Ariel enjoys hiking, dancing and posting adorable pictures of her dogs, Lex and Kima, on Instagram. 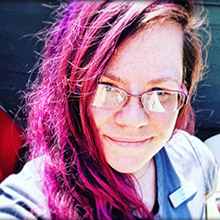 Tracy began working in the Veterinary field in 2005 as a kennel and technician assistant in Memphis, TN. She and her husband relocated to the Pacific Northwest in 2016, with their pack of animals. In her spare time, she enjoys crafting, roller derby, and spending time with her two dogs, Fitzroy and Fern, and her two cats, Seven and Jaxx. 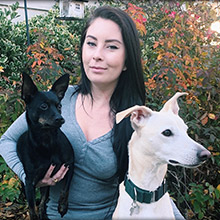 Ever since she can remember Carly has had an overwhelming love of animals. Born and raised in Kailua, Hawaii she spent most of her life outdoors and in nature. Carly moved to Portland, OR in 2010 and volunteered at the Oregon Humane Society while obtaining her Bachelor’s degree in Social Science. She is incredibly happy to finally be working with animals in a field she is passionate about. In her spare time, Carly can be found lounging with her two rescue pups Cider (also from Hawaii) and troublemaker Rigby. 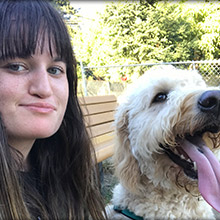 Christina entered the veterinary field in 2016 as a kennel assistant and soon moved into a reception role. She took a break from veterinary medicine to work in education, but while she loved working with kids she missed seeing furry patients in a clinic environment. She has loved animals from a young age and is passionate about advocating for the vulnerable. Originally from the Bay Area in California, Christina spent a few years in Colorado before relocating to Portland in 2020. In her free time, she loves walking around, reading and hanging out with her cats Mila and Forest Oak.